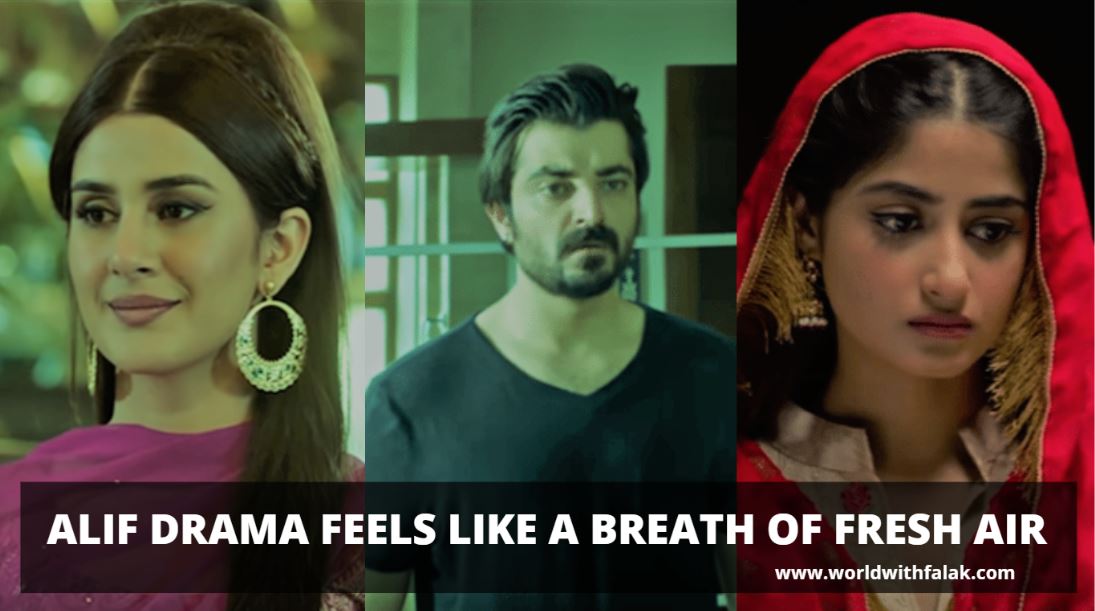 Before I begin with what I have stated in the title, I would like to ask you one important question; do you watch TV for mere entertainment or do you wish to learn something from the content that is available in the form of dramas, films or news?

Let’s just suppose even if you do watch your television screen for a later purpose, what do you get in the name of “masala” content? Patriarchy or women suffering in many ways? The depressing incidents that happen almost every other day in Pakistan? Or below-average comedy shows? I hope you have got your answer and would now agree to what you have missed by skipping Alif till date.

Alif is based on similar people that light up your television or cinema screens. Although the protagonist belongs to a fictional world and is a controversial filmmaker, Momin, but the beauty of Alif resides in the fact how every character is on a journey of finding the right path in their own way and hence this is the reason why we think it can relate to many who go through the choice of spirituality versus glamour of the world at least for once in their lives.

If I were to explain the brilliance of Alif, then it is like that one painting in the museum, which everyone might appreciate for being done with the best colors or by a popular painter but the meaning behind it can only be understood by the ones who look out to find the meaning of life daily.

This is Umera Arshad’s world and one can expect scenes that literally break your heart, stir up thought-provoking debates within your own self and makers surely have cleverly avoids lengthy scenes or speeches that sometimes ruin the impact of discovering the philosophy behind things on your own. However, along with what was written, it’s the director Haseeb Hassan’s brilliance and Alif drama cast that makes every scene worth watching and will keep you hooked till Alif drama’s last episode.

The Beginning Of Life-Changing Lessons

The magic of Alif that we are going to tell you about lies in its dialogues. But it is also the plot and the nature of the characters that capture your attention from the word go. The drama begins with a glimpse of Momin from his childhood days in which he writes a letter to Allah and prays for safe return of his father. Momin lives with his mother, Husn-e-Jahan in Turkey, who has the same wish and is now on the verge of breaking up as she decides to write her husband’s father Abdul Aala. None of them knows where Momin’s father has gone.

Fast forward, Momin grows up to become an acclaimed director and joins the league of his mother who has ruled over the hearts of millions by being the queen of the film industry. But Momin is ruthless and arrogant about the status that he has earned by working hard.

Then comes Momina – a young lost soul who also happens to be the daughter of a make-up artist and part-time side actress as well. She is seeking a special connection with God and despite being recognized for her talent, she would never compromise on anything to make it “big” in the industry.

While there are more characters to follow, we would like to keep some suspense going for you till Alif drama last episode and lead you to the lessons that we have learned from a few of the most amazing scenes that got us thinking on a spiritual level.

Much like many grandfathers, Momin is loved dearly by his dada but if there is one thing that Abdul Aala doesn’t like about Momin then that is his career choice of being a filmmaker. One night the dada cries to God and asks the creator for Sirat-e-Mustaqeem. While this makes Momin curious, he tells dada that he has achieved what many wish for. The whole world knows his name out there. But that doesn’t impress Dada a lot as he asks Momin whether Allah knows him?

With all the anger, Dada is always ready to forgive Momin’s disobedience in a matter of seconds. Momin suddenly realizes that his existence has always been all about sins and hurting people but Dada confronts him by telling that a Muslim can forget his past but it’s the beauty of belief that makes him realize his wrongdoings and make up for it.

Momin recalls his childhood days with Dad where both of them are doing calligraphy together and the adorable little Momin asks innocently “Mera Alif terha ho jata hai” to which Dada replies “Jab tum baar baar Allah ka naam likhoge tou sab kuch seedha ho jayega”. This serves to be a reminder that remembering or turning to Allah can be the solution to many of your hardships.

Momin gets angry on his team for leaving him alone in the times of despair and he explains the situation to his grandfather saying “mene usko chance diya mene usko break di and even said ghatiya insaan”. As this left Dada’s eyes wide open, he taught Momin in reply that he is not the one who can steal anyone’s bread or even livelihood. Anyone’s prosperity or fortune depends only on Allah and no one can steal it from them. If he has given them something then it was as per Allah’s will, Momin was just a source.

How Will The Journey of Spirituality Really End?

As we are inching closer towards Alif drama last episode, now is the time to make up for all that you might have missed. All the characters are going through their complications and seeing them confused, a thought will definitely come to your mind of how far we have gone from our creator and the real purpose of life. Should we actually obsess over the worldly matters or find our peace in God and prepare for a better hereafter?

Well, there is one thing for sure that Umera will leave some questions to figure out on your own and eventually spark a debate within you of how we tend to ignore the creator and even take him for granted.

Is there any particular dialogue or scene that you have liked in Alif? Let us know in the comments below!

No comments to show.

Get all latest content a few times a month!